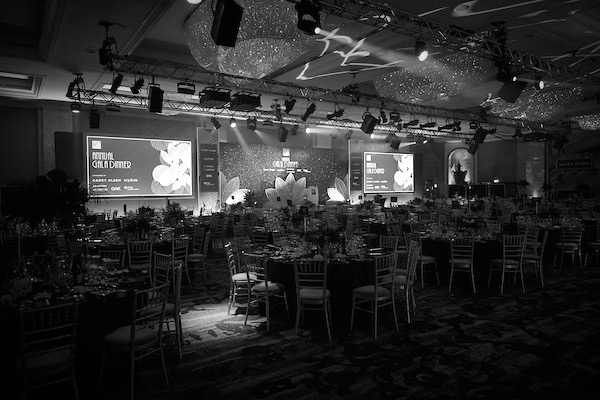 Everyone loves a Christmas Party. But doesn’t it seem like everyone and their dog are hosting one these days? In the real world, more parties are always a winner. But in the corporate world, it’s the one night a year where you have to give people a good reason to attend (10 points if you get the hidden movie reference there).

This particular event has been running for thirty-plus years. This always creates somewhat of a challenge from a design point of view as the event has to stand out from year to year. With 550 attendees, venue choices are limited within central London. You find most of the venues which can facilitate this number of people on Park Lane, and we chose the Hilton.

Let’s start with a word from the most important person, the client.

“I cannot recommend this team highly enough, from every aspect – logistics, design, and communication are all amazing. We recently worked with TNBS on a 550 person dinner in Mayfair. The experience couldn’t have been more enjoyable, and easy! If you are looking for an events team to bring your vision to life, The New Black Studio should be your only port of call.”

What was the main benefit of working with The New Black Studio?

Couldn’t possibly pick one thing! Having the team there from design conception to on the day management was invaluable and freed up my time immensely to work on other things.

The event has many purposes. One, to act as a celebration for the end of the year. Two, to increase revenue. Three, increase brand exposure. We wanted attendees to feel like this is an extra special event. Something different from all the other dinners they get invited to with a lame centerpiece and not much atmosphere. This is where the party is at.

We went for an unconventional theme, Christmas in the tropics. This meant throughout the stage design, branding, table centers, you name it, we kept the focus on tropical but still kept it Christmassy. Obviously much easier said than done.

We started by creating a vision and design boards noting all of the key colours and key concepts. We gave the client ideas on how the set could look, what linen we suggested, opportunities for sponsor branding, press wall designs, invitation designs, menu designs. You name it, we included it in our proposal. As always, the client ultimately made the decisions. We advised on a number of options for each category.

Starting with the pre-dinner drinks, we added decals to all of the walls and mirrors upon entrance to the venue. Straight away you knew what was in store because you don’t get a second chance at first impressions. As we headed into the pre-dinner drink space, immediately in front of you was a giant living wall with sponsor logos embedded into it. It’s important for this particular client to have their sponsor logos everywhere possible. We made sure we made that reality. As guests headed into the next room, immediately in front of them were two huge pillars wrapped in the event branding.

We believe that the set and stage is such an important part of an awards dinner. It’s where the focus is for quite a lot of the night. As before mentioned, this event has been going for 30 years so we needed to think outside of the box. It needed to look different from the years before while also bearing in mind the budget. We hand-sketched the set and came up with the glittered backdrop with laser cut leaves sprayed in gold glitter. This might sound a bit sparkly (if you’ve ever met Rebecca you know she’s not a sparkly person) but we knew that with the right lighting, this would shine in all the right ways. We made the sponsor logo stand out by again laser cutting them and placing them onto the stage.

Then, we used very luxurious linens on the tables in Navy and grey to match the branding. each place had a monstera leaf rather than a charger plate, again bringing all the branding together. We then had bespoke recyclable Perspex menus created which were placed on each guest’s place. The table centers where a mix of tropical foliage in their natural green, mixed with sprayed gold accents. Again, the lighting design meant that the gold was picked up just the right amount.

As we move into the post-dinner drinks, we knew by this point people are tired. It’s that you’re most likely to lose people. With all of these elements, it’s important to remember what people actually want rather than just doing something for the sake of it. So we did a little market research and asked a lot of people what they would want after a four-course meal at an award ceremony.

The answer was, you guessed it, gin. We bought in a sip smith gin station and guests sipped on a refreshing gin before they began to party the night away with our amazing band. We repurposed the press wall as a backdrop to the band to create a great look without spending any more budget. They played the perfect balance of sing-along hits, and songs not to cringe for a corporate event. The other most popular answer to what do people want at the end of an event was sweets. Although they can be a bit been there done that, we did the research and people told us they wanted sweets! We arranged a Polaroid photographer to take photos of the guests as they were enjoying themselves. This served as a great memory of the night but also a tactful way of getting the sponsor’s logos in front of people in a way that they would take home.

Come closing time at 2:00 AM we were literally begging people to leave and it seemed like they all had a wicked time.

Want to know more about working with us?

Get in touch with our creative event management team, they’d love to have a chat.