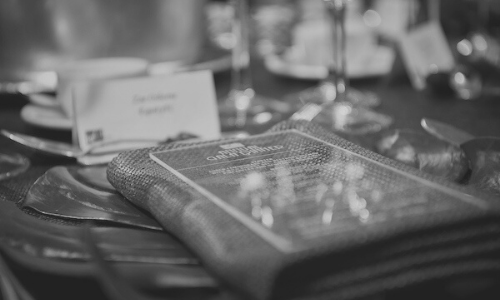 Rebecca here, founder of London’s coolest creative event agency (am I allowed to say that!?). I think it’s the coolest anyway. As a creative event agency that was recently described as planning only “events with attitude”, I think it’s important to document that things haven’t always been this way. The attitude comes from experience of the good things as well as the bad. It comes from knowing that mistakes are OK, and they will ultimately lead to you a valuable lesson. This leads me perfectly onto today’s subject… 10 Things it took me 10 years to learn…

No problem is unsolvable

It took me a good 5-7 stressful years to learn that nothing is the end of the world. Many times I’ve found myself in intense situations where emotions run high and there’s a lot riding your next move. Everyone is human, and sometimes someone will make the wrong call. I’ve learned that it is an absolutely pointless waste of energy to stress, panic, and run around like a headless chicken. Can you see where our no running on-site rule comes from!? As Marie Folio puts it, everything is figureoutable, a saying I live by. Instead, calmly think of a solution, and make peace with the fact that it wasn’t your number one option. Think of how bad it could have been if you didn’t think of that fix! Phew.

You get what you pay for

I’m going to use catering as an example in this section, but you can apply the same logic across any element. There are probably around 50-100 catering companies in London at least, all marked at different price points. With that comes a different level of service. I’m finding it hard to write this section without saying “there are good suppliers and bad suppliers”, but really, the ones I deem as “bad” are just not suited to my standards and needs. It’s very rare that something which borders too cheap is a good option. If it sounds too good to be true, it probably is. I’m all for prioritising though. If serving the finest foods isn’t on the top of your priority list, then maybe something lesser will work just fine. When you have money to spend, there are a lot of people who will be willing to take it from you. We take a slightly different approach and are of the opinion that quality prevails.

This works in two ways. The first is prioritising aspects of the event in question. For example, maybe having live music is the be-all and end-all to your event, but you’re not so fussed about serving cocktails. It’s really important to agree your priorities with all key stakeholders before you go into planning, as otherwise you might steam in and create something totally different to what others had in mind only to be shot down at a later date. No one wants that.

My second point on prioritisation will help you action your to-do list. So much of this stems right back to when I was setting up our creative event agency. A key trait of a good event manager is being able to look at your to-do list, which is 300 items long, and know which one needs doing next. This comes naturally to some, but not others. If you’re the latter, try and come up with a system. Colour coding or giving a score out of 10 are popular ways to get some order to your list. We use Asana, a project management system that has built-in priority settings. Then, start with the easy things. Gradually everything will fall into place.

A good team is everything

When I left my team of eight and went to work from home, I really struggled. I missed having people who were in the same boat as meters away. In the early days of The New Black Studio, I did all the events by myself. Although most of the time you know the answer to your own worries in your gut, having a sounding board you trust is invaluable. It was twice as difficult to do everything myself rather than having the team by my side. I knew, and still know now, I could trust them all to get the job done. When you’ve got a really good team who have worked together for years, they just know things without you even having to ask. They’ll know what you like and don’t like, they’ll know the things you’ll pick up on before you’ve even looked, and they’ll be there cheering you on. You can learn how to print a name badge; you can’t learn a good personality.

Again, this is two, three, four-fold. Let’s start with being honest with your clients or management, something we strive for in our creative event agency. Often people shout ideas at you and are super passionate without really thinking too deeply into the feasibility. You need to have the ability to be brave and honest whilst sticking up for yourself when you don’t think something will work. That doesn’t mean it has to result in a confrontational situation. In fact, you’ll probably build a more valuable relationship with that person because of your honesty. Tearing their idea down in the name of honest isn’t helpful but highlighting potential problems then providing alternatives is.

The other important place you need honesty is with your suppliers. Speaking as a supplier, I find it so valuable when clients feel comfortable enough to be honest with me. That means that sometimes I might have to suck up the fact that not everyone likes everything I do, but I’d much rather that than end up with something which isn’t right. It’s all part of the journey down the yellow brick road in search of the ultimate end result.

Relationships will make or break you

To anyone who has just started in this industry or anyone who’s looking to get into events, this is the best and biggest piece of advice I can give you. This job is hard. It often features very highly on the most stressful jobs lists. You get sleepless nights, overwhelming pressure, and contrary to popular belief, not all clients or managers are nice. The people you build relationships with are ultimately what makes it bearable. From the lighting tech who you have a glass of wine on the floor of a book shop mid-event with, to the clients that are so loyal they’re always your biggest cheerleaders, to the event manager of a competing agency who just reassured you they’ve made the same mistake too and everyone does. Life’s so much easier when you know the right people for the right job. Having absolutely no doubt that they’re going to deliver your brief like they wrote it themselves is a priceless asset. Being part of an on-site team who all get along and club together is the difference between an enjoyable job and one which is painful. The people you meet and the relationships you make will get you further than any marketing budget. Treating everyone with a mutual level of respect is the only way to be.

16-year-old me would have thrown this back at you with a “well I don’t need experience I’ll just learn as I go”. Whilst that is a valid way to live life, it’s quite a hard one. Now that I’m this far down the line, I don’t spend as much time worrying about situations, or guessing pinch points or muddling my way through. Nine times out of ten, I’ve been in the situation before, or if not something similar. Being able to draw on a back catalog of experience makes each situation less of a situation.

I don’t know how much I can actually write about this. Every time I’ve thought something was going to be a nightmare, it was. Equally, there have been occasions I’ve proceeded with decisions based on “a good feeling” against the advice of others. It’s so important to have faith and trust yourself.

Now, my standards have got me into a lot of difficult situations over the years and has ultimately led me to be disappointed quite often. However, I know what’s right and I know how things should be. Ultimately on an event, each small part comes together to play a much bigger role, and if one of those parts lets you down, everything else becomes much harder. It’s like the domino effect.

Having a little knowledge will take you far.

Back when I started my career, I’d have looked at you very blankly if you started talking to me about gobos, set flats, and rigging (all production terms). I’ve made a conscious effort to learn as much as I can about each aspect that goes into an event, and it’s served me extremely well. It allows me to speak with confidence about certain parts. It also allows me to push for things I know are possible. By understanding how things work, your creativity can be practical. There’s no point in coming up with the best idea under the sun if it’s not physically possible to achieve, that’s the key to a good creative event agency.

If you’re at the start of your career, I hope this article has given you a bit of inspiration, motivation, or direction.

Need from help from a creative event agency? Get in touch today.